The numpy package is at the core of scientific computing in python. It is the go-to tool for implementing any numerically intensive tasks. The popular pandas package is also built on top of the capabilities of numpy.

Vectorising computationally intensive code in numpy allows you to reach near-C speeds, all from the comfort of python. See, for example, this previous post in which I speed up a function provided by the PyMC3 project by over 500 times.

Numpy really is a great tool to use right out of the box. However, it’s also possible to squeeze even more performance out of numpy with Intel’s Math Kernel Library (MKL). In this post I will introduce Basic Linear Algebra Subprograms (BLAS) and see how choosing a different BLAS implementation can lead to free speed-ups for your numpy code.

I’ve found that whatever machine I pip install numpy on, it always manages to find an OpenBLAS implementation to link against. This is great, with no extra steps compiling numpy from source and manually linking against a BLAS library, we get the benefits of BLAS, all for free.

So, firstly, I should mention that Intel provide a python distribution explicitly intended to speed up computation on Intel CPUs. However, it is also possible to install select Intel-accelerated packages into a regular python distribution. In practice I prefer this latter method, finding it quicker to set up on a new system and giving me the illusion of more control.

Okay, great, so we can install select packages which are intended to perform better on Intel CPUs, but do they actually outperform OpenBLAS on your particularly system? Naturally, it’s time for a benchmark.

I’ve included all the code necessary to perform this benchmark on your machine here. To run these tests you’ll need virtualenv and bash (and python…). Give it a go and find out how Intel MKL performs on your machine. The comparison is made by computing a speed-up factor.

First, let’s take a look at how Intel MKL performs on some basic linear algebra operations. From the graph below we see that Intel MKL has outperformed OpenBLAS for the three functions we tested. In fact, computing the determinant of a matrix is over 8 times faster with Intel! Neat. And recall that we haven’t had to change any of our python code to get these speed-ups. These speed-ups are, for all intents and purposes, free. 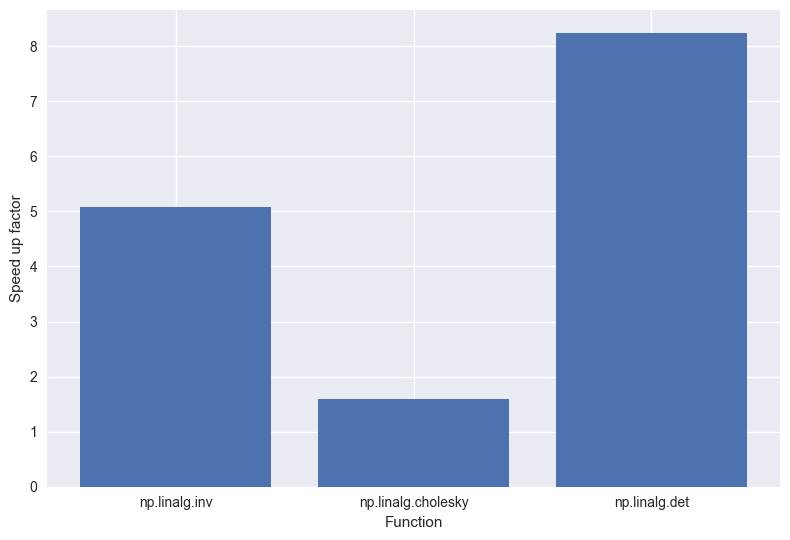 Next in line for inspection are numpy’s fast Fourier transform functions. I was really impressed with the performance of Intel MKL on these functions: np.fft.fftn was a huge 10x faster than the OpenBLAS linked numpy. If you’re regularly using numpy to perform fast Fourier transforms you’d really feel the benefit here. 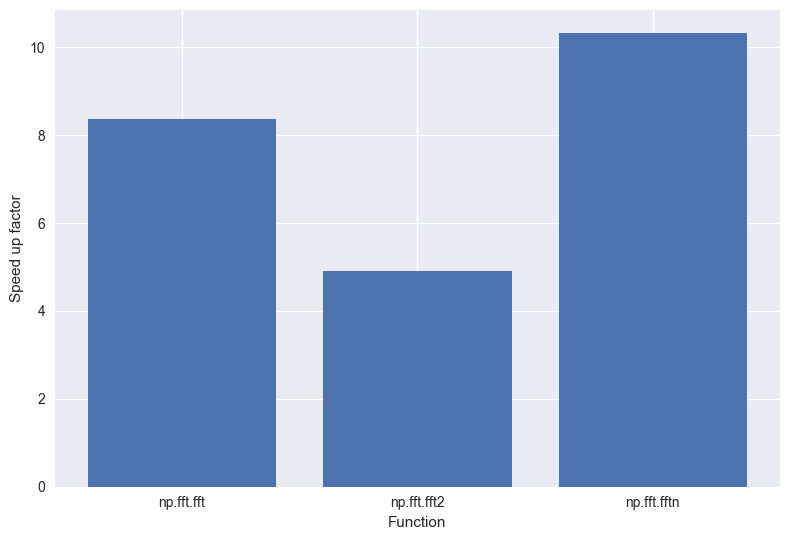 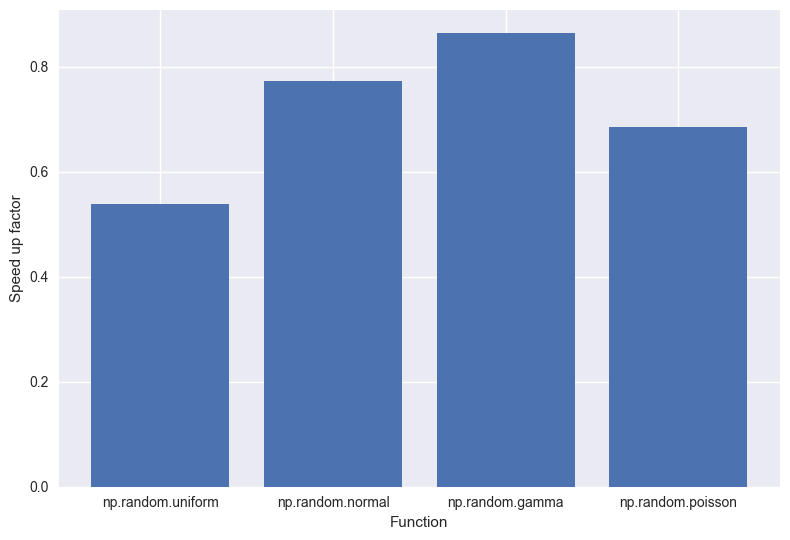 BLAS libraries are a great way to squeeze extra performance from numerically intensive schemes. However, which BLAS library you choose can affect the performance of your code. In this post we compare the speed of numpy with OpenBLAS and numpy with Intel MKL. The code I used for benchmarking is provided here, and so the reader is encouraged to run these same tests on their machine, to assess performance on their exact setup. On my machine, at least, I found that Intel outperformed OpenBLAS on the fft tests and the linear algebra tests, but lagged behind on the random number generation.

The results shown in the post were generated on my work desktop, which has the following stats: