Matplotlib plots for LaTeX with PGF

Matplotlib’s pgf backend is pretty great, allowing plots to be exported directly from python to pgf drawing commands. These drawing commands can be inserted directly into a LaTeX .tex document, and so the generated plot will be realised at compile time. This method of embedding plots into a LaTeX document allows a quick and easy method to ensure that fonts between your document body and plots match.

Matplotlib’s pgf backend represents a non-interactive backend. This means that you won’t be able to preview your plot in python, and instead have to export the plot before you can view it. You can change to the pgf backend as:

It’s important to note that the backend must be set before importing matplotlib’s pyplot interface. Once we have set the backend, we can proceed to plot as usual. Here I plot realisations from a normal distribution, and save the output to a file named norm.pgf.

It’s as simple as that. We have now exported a plot to pgf drawing commands, ready to be inserted in LaTeX.

Typically, we insert figures into LaTeX with the \includegraphics command. However, we cannot insert our pgf plots this way. Instead we must make use of the pgf package and the \input command:

After compiling this .tex file (and adding some dummy text), we are rewarded with the following unsatisfactory document: 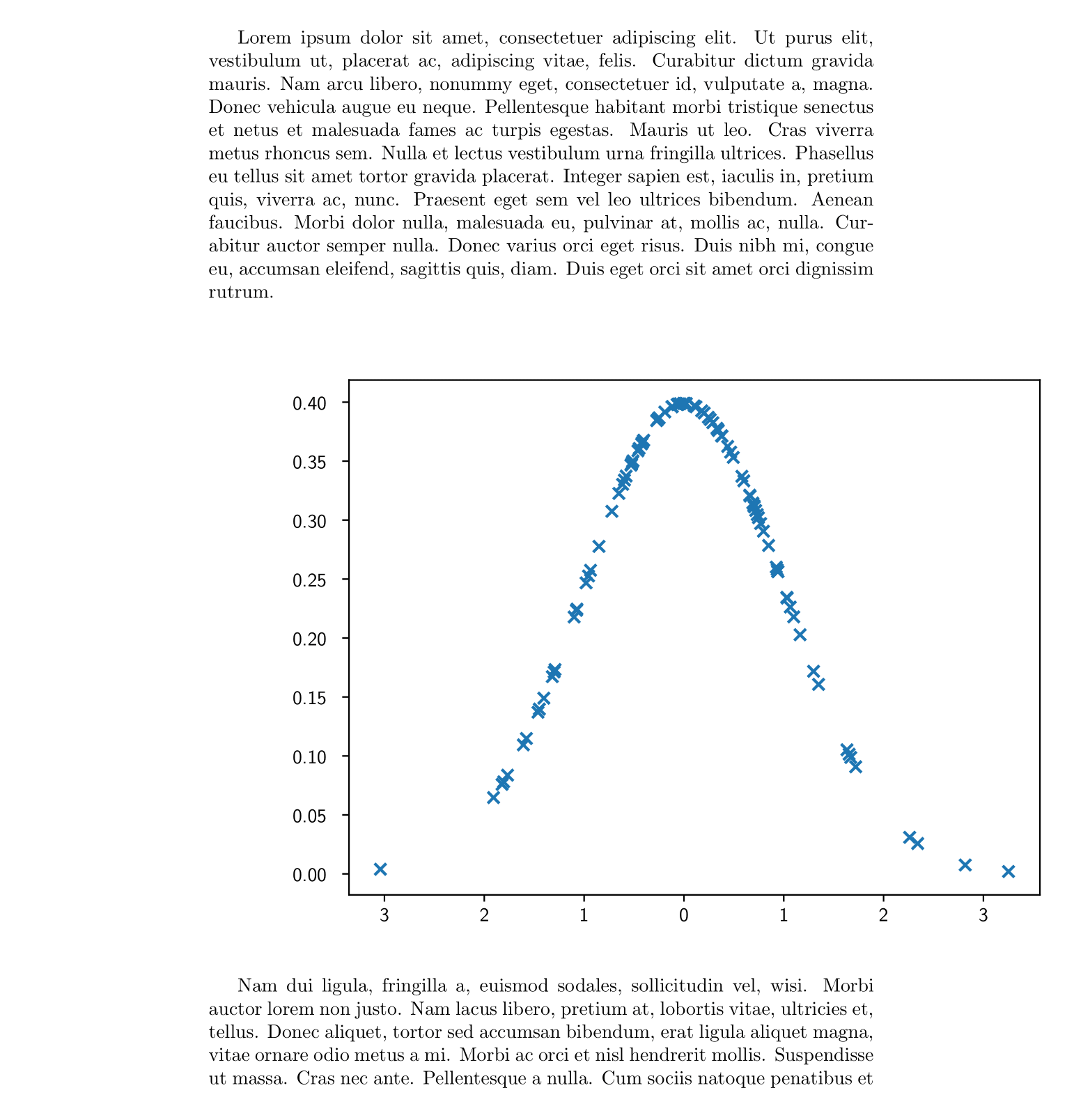 Fortunately, as we will see, it only takes a few steps to go from the above monstrosity to something much more endearing.

Our efforts so far have been rewarded with nothing but an eye-sore. But we can salvage something beautiful from it yet. First we shall consider the size of the plot: it’s obviously too wide for the document it sits in, and it has a rather unsatisfyingly square aspect ratio.

It’s possible to scale our figure within LaTeX, using a \scalebox or \resizebox command. However, I prefer to determine my figure size at the matplotlib end of things. To do this we first determine the textwidth of our documentclass. We can do this using the \showthe command.

If we recompile this .tex document compilation will halt once the \showthe command is encountered. At this point the textwidth of our document is displayed.

Here we see that our document is 345pts wide. To specify the dimensions of a figure in matplotlib we use the figsize argument. However, the figsize argument takes inputs in inches and we have the width of our document in pts. To set the figure size we construct a function to convert from pts to inches and to determine an aesthetic figure height using the golden ratio.

We can use this function to recreate our earlier plot so that it doesn’t extend outside of the margins, and so that it has a more aesthetic aspect ratio.

Okay, so we’re now within our margins. But the clash between the font in our plot and the font in our document body is rather jarring. Fortunately, this is an easy fix. To match the font between our plot and LaTeX, it’s enough to instruct matplotlib to use a serif font to typeset the text. To achieve this we update our rcParams as:

Matplotlib style sheets are a great way to change the theme of your plots, without having to alter your plotting routines. You can list the available style sheets with plt.style.available. I have quite the penchant for the seaborn style at the moment. This style can be applied with the command plt.style.use('seaborn').

Putting all of these things together, and using the set_size function as defined earlier, we have:

So, we’re pretty much there now. However, we can make a couple of small adjustments to our .tex file to help set our figure just nice. Here we shall float our plot in a figure environment, and also ensure that it is centered properly in our document. 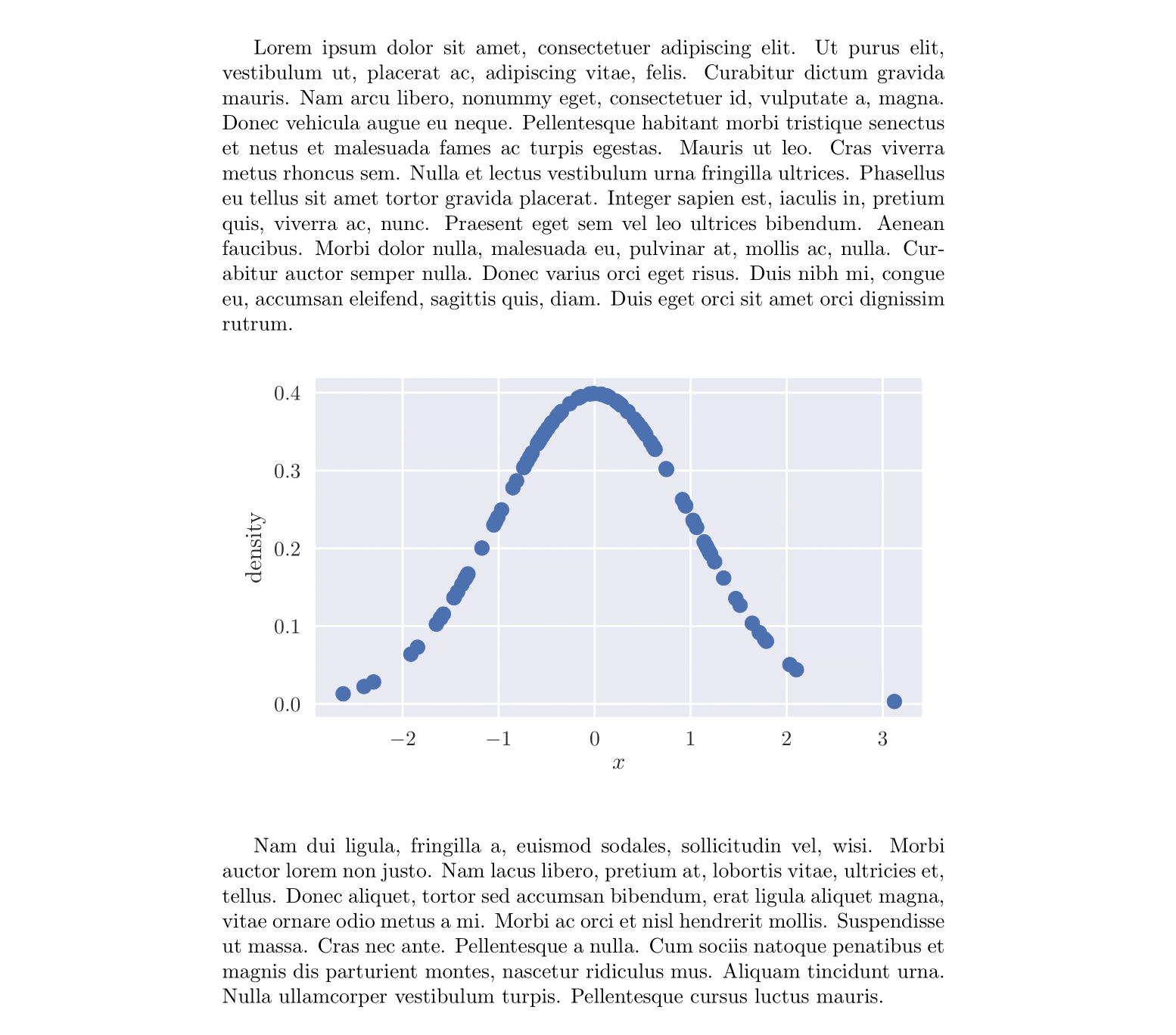 Drawbacks of this approach

Though I do like this approach, and it is a convenient way of getting plots into LaTeX, it does come with its drawbacks. If you’re working on a larger project, or simply one with lots of plots, you’ll soon notice the compile time of your .tex document sky-rocket. This is because at every single compile LaTeX is working to create your plots from the pgf plotting commands. A solution is to realise each figure with a LaTeX standalone documentclass. With a clever Makefile you should be able to keep your compile time down.

Another common problem with pgf plots is memory; once you’re producing plots with lots of data points, the .pgf file grows very quickly. This memory usage will quickly upset pdflatex, and before long pdflatex will refuse to compile your document. It is possible to increase the main memory limit of pdfLaTeX. Alternatively, LuaTeX can dynamically alter its memory as needed.

Although these problems are surmountable with a little patience (and may not even be problems for smaller projects or simpler plots), I tend to stick to the approach I outlined in this previous post.